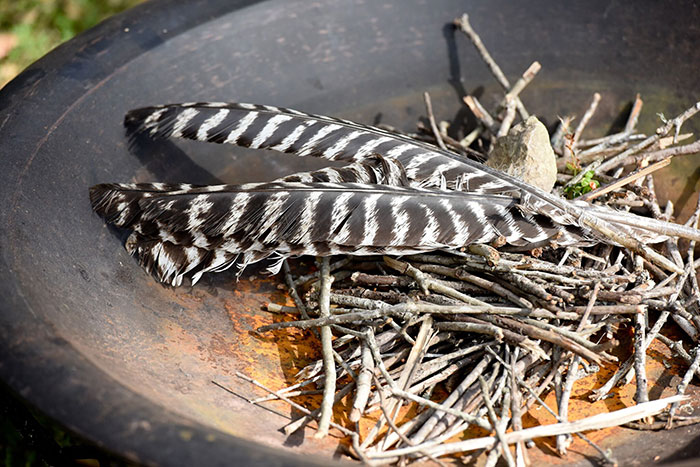 Ceremony is an important practice we can adopt that allows us to witness the intelligence of life. I have a few really dear friends who are native American and who live close to the practices of their culture. In sitting with them during certain rituals, I’ve come to understand the value of ceremony itself.

There’s always an incredible symphony of language and relationship with life happening all around us. Yet we tend to be so caught up in our daily tasks and the perceived sense of pressure that we don’t even notice that the relationship, the symphony, is there.

So when I spend time with native friends, I tend to notice the impact it has when they deliberately make space at different junctures to integrate ceremony into the way they live.

It seems to me that in ceremony my friends take all of the magic that’s happening in each moment and they create a container around it so they can witness it. They take the time to really feel into and acknowledge what kind of personal relationship are they having with the magic of life. Where do they want to grow it, where do they want to evolve it?

In the westernized American culture I was raised in, it was fairly normal to create a small ceremony and reflection around a birthday celebration, Christmas holiday, or while trying to decide on a useful intention during New Year’s Eve.

Yet over the last several years I’ve come to see that the power of ceremony is available any time. We are in ceremony whenever we create momentary brackets around our lives, when we step out of our current story and consciously view our relationship to the mystery of the moment.

When I do horse work with clients, such as in round pen exercises, the quality of a ceremony seems to emerge naturally. That moment becomes a place where a person can receive guidance and support. They have a contained place and time to witness how they have been relating to life itself and seeding the visions of their own creativity.

I experienced a beautiful example of this a few weeks ago with a client I’ll call Gloria, who came to me seeking a deeper sense of peace. She was a very smart, driven, highly successful, mother of two, who owned her own business and clearly ran a tight ship in her household.

I asked her if we could think of this time together as a ceremony, a container for her to use in order to witness the relationship she is having with her own life. Gloria agreed and began trying to connect with the horse by inviting him to walk along beside her. She tried several different approaches that she thought were effective in her approach to everyday life. First, she used her intellect. Next, she tried her charm. She leaned on her determination and then finally on her identity as a caretaker. But despite all her efforts, nothing worked. The horse had very little interest in walking anywhere with her.

I asked her how much she thought she was in control of what happens in her life. She smiled and said “I think I’m in control everywhere. It’s my job to be in control. I have to lead things, or else they won’t happen. Right?”

I explained that the horse has very little interest in control and manipulation, even when those things are coming from a well-meaning place. “Instead of trying to do something to feel peace, see if you can notice how the horse is mirroring back to you a state of surrender and peace in this moment. Can you learn from that?”

Most of the time we’re unaware of the vast discussion that’s going on around us. We’re often so caught up in the dreamscape of life that have no idea what we’re seeding in our relationship with it. Creating ceremony can become a practice in which you slow down your awareness and feel into the conversation, just as Gloria began to do. Ask, “How am I treating myself at this time? How is my engagement with life going? What do I actually want to create? What relationship do I want to have with the magic of life?”

Gloria and I talked for a while longer about cultivating a sense of peace that isn’t tied to any particular outcome. As she gradually let go of a need to perform, a need to try to make a connection with another, Gloria seemed to breathe easier and to emanate a sense of “home” within her own body. She was letting go of controlling and outcome and instead just settling into being herself.

I smiled as I watched the change in her. She was now walking through the round pen feeling out wherever her body wanted to go, without a plan, without a purpose, without the need for success. A few moments later she felt the warm air of the horse’s breath on her neck. A huge smile broke over her face as the horse fell into pace behind her.

Ceremony can be any small practice in your day: a simple short meditation or yoga practice, a ritual around your cup of tea. Your ceremony can be going for a walk, or just sitting outside for five minutes and noticing what you notice.

But don’t be too earnest about ceremony. You can’t get this wrong! Try not to turn it into another form of control by attempting a perfect ceremony. It’s just about making a deliberate practice to witness and build conscious awareness around your relationship with the magic of life.

In each moment that we pause to open our awareness, we create the opportunity to plant a new seed in the garden of our lives.

I’d love to know how you build ceremony into your life. Give it a try and tell me about your experiences on Facebook!