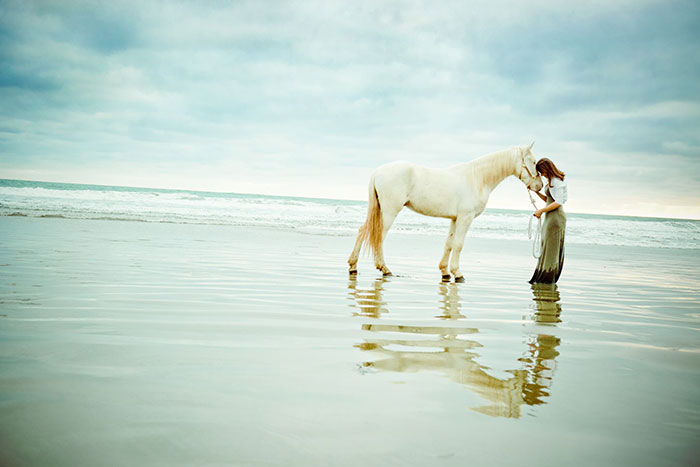 Emotion is a fluid energetic with its own natural intelligence. We tend to experience our emotions as deeply personal, but in this piece I’m going to invite you to consider emotion as a function of physics, something that just is. And the first characteristic of emotion is that it’s dynamic: it wants to move. It is a wave formation whose natural state is to flow.

Emotion’s role is to provoke an awareness of what you need and to guide you towards healthy self-expression. It creates a connection to our own needs, which we can then communicate to others.

Many of us have been taught by our culture, and often our experience, to suppress emotion. We attach stories to the act of expressing emotion and these in turn can cause guilt or shame in addition to the original, suppressed, emotion. When we suppress this natural force, the energy of the emotion is prevented from passing through us.

Yet the intelligence of the wave of emotion has to keep moving. So when we don’t feel that there is any safe way for it to be expressed or received, the emotion effectively becomes stuck in the body. It is recirculated, and, with nowhere else to go, it turns inward, becomes directed at the self. As I said to a friend recently, “If you don’t let this out, it will shred you from the inside.”

This process can take place over years, even decades. Instances of trauma, particularly instances of physical, sexual or emotional abuse, often take place in an environment that does not allow for the emotional response that the body needs to go through in order to create balance and personal harmony. When this is the case, the need to communicate the trauma and express the violation of a boundary often feels impossible (and often it is).

Because of that, we don’t allow ourselves to express our anger and express our own truth. It happens almost instantly: the psyche processes the environment and makes the calculation that to express our truth would cost us the human connections we link to our own survival.

This process is regularly visible in Equus Coaching. Not long ago, I had a session with a client I’ll call Jim. As we began our session, I asked Jim what he would like to focus on. His initial response was, “I want to create a strong connection with the horse.” I invited him to spend a little time seeing how he would naturally go about doing that. Within a few moments, Marco the horse came over to say hello and investigate. I watched Jim stand still as gradually, Marco began to step into Jim’s personal space. Jim would take a step backwards, then to the side, trying not to get knocked over.

After another minute of this dance I asked Jim, “How are you doing?”

A few minutes later, Marco had begun chewing on Jim’s clothing and headbutt him. He was seconds away from biting. Yet Jim insisted that everything was fine.

I prompted him, “Are you noticing that this is getting a little uncomfortable?”

“Yeah, maybe so,” he finally admitted.

“I’m curious about the inner dialogue that’s coming up for you right now,” I said.

“Well, I’d like to create a little more space between me and Marco, but my mind is telling me, I don’t know what I should do. There’s a right way to do this and I don’t know how to express myself. I’m stupid, I’m small. I’m inadequate. What if I express myself and it’s too much and he runs away?”

When someone does not feel safe to express themselves and to communicate their own boundaries, they often end up in some version of Jim’s situation. In life, our boundaries are violated, sometimes in small ways and sometimes in very large ways. One reason we let this happen is that we fear that it’s unsafe to express ourselves. In other words, we believe that if we spoke up or expressed our emotion, people would become angry and leave us. We wouldn’t be able to get the support we need. We would ask but nobody would listen. Sometimes this fear is legitimate, and sometimes it’s unwarranted, but in each case it tends to override our need and blocks the associated emotion.

But the sadness, frustration and most often anger that come with not honoring our needs has to move somewhere. So we end up shredding ourselves with those feelings, completely unaware that we’re doing it. When Marco steps in and investigates Jim’s personal space, Jim is not allowing his need to be heard and understood. Instead, the frustration and even anger that results isn’t consciously acknowledged, and the energy is redirected inwards – this causes Jim’s destructive inner dialogue: I’m stupid, small, inadequate, I should know what to do, I just need to learn how to do things better…

So whenever we don’t allow for the expression of our own needs and our own personal boundaries, the energy will be directed towards shredding ourselves. We do this whenever we don’t feel safe to express our genuine emotions.

As we talked, Jim began to recognize that his frustration was an intelligent emotion. It was signalling him to become aware of his need for more space, and inviting him to express it.

When I asked him what happens in his life when he gets angry, Jim laughed. “I never get angry. I don’t think that’s a good way to handle things. I always try to be calm and polite.”

Of course, Jim’s desire to be calm and polite masks the fear of upsetting others. This fear blocks the natural intelligence that could open up the space he’s seeking and causes his emotion to shred his own sense of self.

You’ll never see a horse in a herd suppress emotion. Instead, they openly and willingly express feelings of frustration, anger or discomfort to each other. Interestingly enough, this doesn’t create an aversion on the part of the other horses; it creates a peacefulness that every member of the herd is being open, honest and transparent about their own needs.

I’d like to invite you to try a simple practice in order to become more aware of your own emotions. Find a way to get a regular reminder to stop, such as an app or a timer. When the reminder sounds, become still for a moment and feel the inner landscape of your own being. Make note of what emotion you are actually feeling in that very moment. By simply acknowledging what you’re feeling, you can transform the unconscious process of blocking negative emotions, which leaves them to create an attack on yourself. Instead, you can allow yourself to feel the emotion that’s present for you and allow yourself to witness your own truth. Just like that, you’re enabling emotion to flow as it needs to, and making space in yourself for limitless personal freedom.